The Championship Game hosted the fourth matchup of the season between HD Imports and Papa Murphy’s.  All 3 of the games so far have been shutouts, with Papa Murphy’s winning first, 4-0, and HD Imports winning the next two 3-0 each.  And so it would seem that the first team to score would win via shutout.

But this is the playoffs, and epic games were made for the playoffs.  And this game was epic.  Early in the contest, Mondo Normile carried the ball from the defensive zone, over the blue line, and when pressured by the defense, slipped a pass to Rookie of the Year contender Nick Stanley, who craftily snuck the ball behind veteran goalie Eric Patterson.  Several minutes later, while on a penalty kill, Zan Henry aggressive play in the offensive zone against the boards resulted in a pass to an awaiting Matt Schmidt, who punched home the tying goal.  A back and forth 1st period ended with the score locked at 1-1.

At half-time, in the HD bench, the message was clear.  Get back to our game of smart passes.  So on the faceoff for the second half, Kevin Hummell (sorry bud, had to call you out!) received the ball, passed it directly to Scott Norton, who passed it to Zan Henry whose amazingly accurate shot must have surprised Goalie Mark Rizzo, and beat him low on the right side of the goal for the go ahead goal.  Now let’s get back to the accurate passing…..you see, the only problem here, is Scott and Zan are not on the same team as Kevin; so much for the pep talk at halftime :(.

The game continued to be a battle, with several shots on each goalie, neither goalie making a mistake.  But there was a feeling that this game was not ending 2-1, as there were too many chances for too many goals, and too many players on the ice known for scoring goals.  On a faceoff in the Papa Murphy’s defensive zone, HD Imports wins the faceoff, the ball ends up on Mondo Normile’s stick, who passes to Richard Stanley, who moves to his right, sees a shooting lane, and drops a bomb of a shot toward Eric Patterson.  Between Eric and Richard was Janie Norton of HD Imports, who deflected the ball behind goalie Eric Patterson, scoring her first ever Carolina Broomball Goal!!!  The two point goal gave HD Imports the lead, and the pressure was on for Papa Murphy’s to tally their third.  As time continued, and the score remained 3-2, Papa Murphy’s pulled their goalie for the extra attacker, and pressed hard to even the score.  With an open net 200 feet away from the action, the ball bounced out of the offensive zone, and was picked up by Richard Stanley, who controlled the ball, passed to an oncoming Nick Stanley, and sealed the victory for HD Imports.

Congratulations to both teams for an excellent Championship Game, and special congrats to HD Imports, for earning your name on the Austin-Thomas Cup as Spring 2016 Carolina Broomball Champions!!! 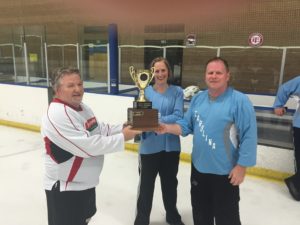 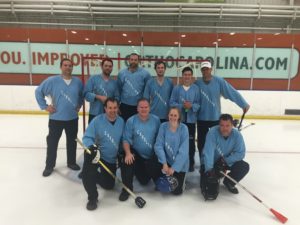 We are an adult recreational co-ed league in the Charlotte area. We make every effort to maintain a league that is competitive enough for advanced players, yet recreational enough for beginners to enjoy it.

GOOD NEWS! You can get your broomball fix early to

Carolina Broomball is excited to announce that the

Volunteering for Carolina Broomball at the Kane Br

These two helmets are going up to the great locker

Check out my score! Trash Dash CLT is a new mobil

Come play Broomball with us! The equipment locker

GOOD NEWS! You can get your broomball fix early tonight! There is no regular Carolina Broomball pickup tonight, so… https://t.co/y4m93MzF8l